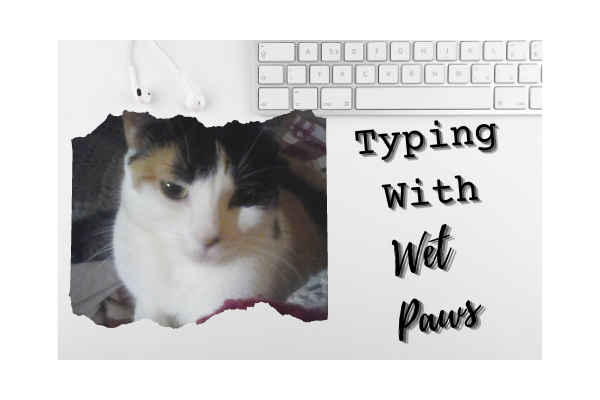 Tails up, Storm Troopers! I’m Storm, you’re awesome, and this is Typing With Wet Paws. This week, Aunt Anna has a lot of work in front of her, because she has two books that need a second look at the same time. You read that right. This coming week, she is in double edit mode, and she kind of doesn’t hate it.

Aunt Anna is pretty darned happy to have not only unearthed her Alphasmart, but charged her and has her ready to go. I may or may not have had something to do with the “test” document that was about a million lines of “33333333333333” over and over and over again. Nobody can prove anything. It’s all conjecture. Not my fault if the Alphasmart is super super super interesting. Aunt Anna thinks that too. She can stare at that thing for ages, and do the clickety clack thing with her fingers on the keyboard at a respectable pace. Can you blame me for wanting to give it a try?

Anyway, that’s going to come in super useful because Aunt Anna does her best writing writing in longhand, meaning it will need to be transcribed, and if she can do that from the comfort of the soft office, with hot beverage, weighted blanket and super cute calico companion, that much the better. Also, she can’t be distracted by The Sims of chats with online friends. That is a real peril for the extroverted writer, and Aunt Anna certainly is that. That’s where a mews like me has to rein her back into line.

This coming week, she has the first fifty pages of Drama King to edit (well, look at Aunt Melva’s edits, say yes or no or yes and/yes or/etc and bat it back Aunt Melva’s way) and she has the whole first pass of edits on A Heart Most Errant, and then send it back to the editor for the second pass and formatting and all of that fun stuff. If she does 25 pages of that a day, she can get the first pass dealt with in one work week, unless she hits a snag, which she can’t promise she won’t. Either way, this is a stage that she likes a whole bunch, because it’s like doing surgery on the story at hand. Most of the time, this ill also give her fuel to put new writing stuff to start its own process on the back burner, and she’ll alway6s want something ready to catch those ideas to hold them safe until it’s there turn.

All of that work is going to require some well filling, and that’s where her Goodreads Reading Challenge comes into play. Aunt Anna is doing pretty well this week, at eighteen books read out of ninety, which puts her at twenty percent of the way to her goal, and six books ahead of schedule. She is salty that the library does not have the third book in Eloisa James’ Desperate Duchesses series but she did suggest that the library fix that, so we will see how that goes. It’s not like she doesn’t have other books, or can’t get it elsewhere. Audiobooks make great journaling buddies, which she expects to keep on doing in the coming week.

On the Buried Under Romance front, Aunt Anna posits some questions for new romance readers (and others) in honor of last week’s Valentine’s Day. I think they are interesting questions for any time of the year. If you feel like answering any of them, or have any of your own, consider dropping your answers/questions in the comment sections on that site or this one. Aunt Anna is nosy.

So am I. Big surprise, I know. Comes with the whole being a cat territory thing. What are you reading this weekend? Have you ever used an Alphasmart? Would you like Aunt Anna to show you what an Alphasmart does? What do you think of my new signoff photo?