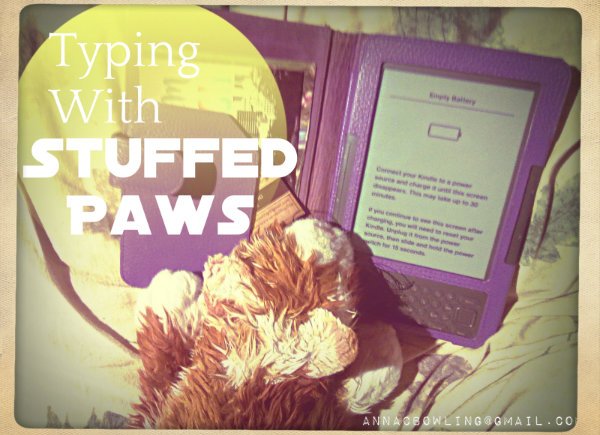 Greetings, foolish mortals. Sebastian Thunderpaws Hart-Bowling, coming at you with all of the stuff from the week that was. It’s a rainy Friday here in New York’s Capitol Region. We’re starting a new month here (fine, everybody is; that’s how calendar months work) and wrapping up what Writer Chick probably won’t object to me calling the Week Of No Energy, because that is pretty accurate. Note the lack of battery power on the Kindle in this week’s picture. Writer Chick did not intend for that to tie in with anything, but here we are.

Even so, there’s stuff to bring you (otherwise, I would nap through this post, because this is perfect napping weather. As usual, Saturday found Writer Chick at Buried Under Romance, asking for input on the best points of entry for some popular historical romance writers that Writer Chick hasn’t gotten around to reading yet, for some reason. Follow the link to read for yourself. It’s never too late to weigh in on important questions like this.

Since this was a week of little to no energy, there was not as much writing or reading going on over here, but Writer Chick still pressed forward. Z Publishing will be including “The Fox and The Lily,” an amuse bouche of historical fiction with strong romantic elements. It’s also nudged her into fleshing out the whole of Cornelis and Lydia’s story to novel length, with two companion stories. Writer Chick does like her generational sagas, At least that takes care of the question what Writer Chick is doing next when it comes to historical romance. Probably. She has been sketching out some stuff in longhand, and of course this will give her a reason to set up a new notebook, to capture all the idea soup for this venture.

Speaking of which, the new month occurs at a convenient time, as Writer Chick finished her last morning pages book, and started in on a new one. This new one is by Punch Studio, which she loves for the pretty page factor, her pens are all ready to go. Writer Chick is big on pretty paper things, so that’s one point for things to look forward to in the mornings, I guess. I mean, besides caffeine and the company of a handsome stuffed orange boy.

Speaking of orangeness, we now move on to her newly cobbled together blogging notebook. Writer Chick originally got this orange notebook as her daily planner, which was really fun, but took a lot of time, and then she  moved, so that kind of fell by the wayside, but she still wanted to use the book, and she can’t countenance getting a new Exceed notebook before she has used the old Exceed notebook. Since she likes writing longhand first in pretty much everything, this book is now her blogging notebook, where she can put down ideas as they come throughout the week, and hopefully cut down on the number of times she stares at the computer screen, makes that “ummmmm” sound, and then babbles until she’s hit 700 words.

The week of little to no energy was also a perfect opportunity to cut some fat from the notebook habit. I know, I was shocked, too. For a lot of the last year, Writer Chick also did some brain dumping at night, aka evening pages at the end of the day as well as the morning pages at the start of it. That setup all went into a big folio, with its own pens, and, this week, she got to a point of “nah.”  Evening brain dumps can still happen when needed, but they don’t get their own book anymore, and now the folio is all about blog stuff, which makes Writer Chick more excited than tired. This will also come in handy, as Writer Chick and Other Writer Chick get all their metaphorical ducks in a row and set up their own website for their co-written work. Of course there is going to be some sort of blog going on there, so having one central place to put all of that stuff makes a lot of sense. Expect her to blather more about that later, possibly when she has this one full and it’s time to set up a new one.

Since this was the week of little to no energy, Writer Chick did not take things lying down. Well, she did spend some time lying down, but that was still kind of para-writing, as she did some longhand stuff, and listened to a lot of Book Tube videos. Note that I said “listened to” and not “watched.” Sometimes, she watched, but most of the time, it was listening, which did give her some ideas that she will probably blabber about in the future, but she will probably want to write them out in longhand in her orange book first. She had expected to spend some of that low-energy time reading, but most of that was what Dude calls “lying next to a good book.” That still kind of counts, especially if one  considers staring wistfully at the cover partial credit. Writer Chick plans to get some more of that reading done over the weekend, and there may or may not (I can’t read the orange book when Writer Chick is writing in it) some blathering on that very subject at Buried Under Romance for tomorrow’s post.

Until then, Writer Chick is taking advantage of this lovely grey day to break out paper and pen, make some tea, and keep a couple of books within arm’s reach. If she does decide to grab a nap, well, I will be ready.