This morning, I sat at the kitchen table -I call it the kitchen table, though it’s really in the common room; we basically have a studio apartment, plus a bedroom-  and made a list on pen and paper, to make some sense of the blog topics swirling around my mind this morning. There were a lot.

Two nights ago, my writer friend, H, introduced me to an animated Japanese film, that is still holding onto a lot of my brain space, and, oddly enough, embodies a lot of what I love about historical romance, though the film really isn’t one. Still thinking on that, and will likely blog on that later. There’s the conference coming, and stuff I still have to o in order to get ready, much of which I will be doing after I get this  blog entry posted.

Then there’s the (probably) most mundane thing on my list, the fact that I like writing at the kitchen table, which is not really the kitchen table. It’s not in the kitchen, and it’s basically the everything table, but kitchen table it is, when I tink about it, so I’m calling it that.

Since I am a pen and paper first writer, having the table solves al ot of the between-offices issues. When the rest of the family is ougt of the apartment, there’s my uninterrupted writing time. My brain works easier on pen and paper than facing a blank computer screen, so I’m not sure why I haven’t roughed out blog entries on paper before now.

In the best of all possible worlds, I would probably want to write in longhand only, hand the pages off to somebody else to transcribe, then go over the printed pages with pens, highlighters and sticky notes, as many times as it takes to make a finished raft. Maybe that will happen someday, when I’ve sold more books, but, for now, I have to fill both roles.

Writing at the kitchen table has a few benefits. For one thing, there is a time limit. Since this is the everything table, I need to be done by mealtimes. I usually do the cooking anyway, so that limit is pretty but make-your-own-sandwich nights, and eat in feral cat mode, aka everybody retreat to their neutral corners nights, are now a thing. In that case, I get the table.) Because the table is the everything table, that also mean I can’t let any clutter accumulate. When the session is over, everything must go, and back to the place where it lives, so I can find it for the next time.

The table is also within eyeshot of the kitchen, so I am only a few strides away from tea, at any given time. Tea is an essential part of the process, so this is a huge plus. When I look up from the page, the first thing I see is the flame of the jar candle, which is another strong positive. Maybe its’ something primal about how our ancestors would gather around the communal fire, and tell stories. Maybe it’s that I like candles. Maybe Stare at the flame for a few seconds, take in the scent (iced tea scent, today) and then get back to putting ink on the page.

There are a few negatives, too. For one thing, I really like writing at the table, but handwritten manuscripts are a thing of the past. Little historical romance writer humor there. Very little. This means that, at some point, I am going to have to transcribe.

This is an issue because all of the  outlets directly under the table are occupied by router and something else with blinky lights. There are also outlets that I could reach, with an extension cord, to the left or right, but, on the right, those outlets are already occupied by TV and cable box. To the left, we have Housemate’s bed. The cord would go directly across her face. We’re good friends, but extension cord across the face is a lot to ask, even for besties. This also means that I would need to fix the Mac’s three-beep thing (which I have to do anyway, so put on the  big girl panties, Anna) and/or propping the pink laptop up with multiple binders, so it’s at the right angle, or, for the truly desperate and/or dedicated times, hauling the desktop and monitor over to the table, and then putting it back where it goes, when the transcription session is done.

When we do move, and I can get my real desk back, I want to keep it for handwriting, and get a different desk for computer work.  Since my beloved office chair has wheels, I can put each desk on opposite walls, an turn around when I want to go from one, to the other. Space permitting. If not, well, I really do like this table. 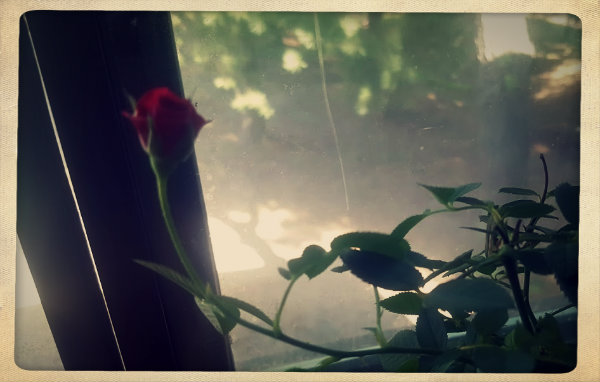 In other news, there is an update on the War of the Roses. Tudor (or maybe Lancaster, as it is possible that somebody mixed up the pots before they got labeled) officially has a blossom. Bloom? Flower? I will know for sure when it fully opens and shows us if it’s all red, or red-and-white.  More petals than bud now, so I can’t say bud anymore, but my rose vocabulary is lacking. At any rate, I am proud of this new development. His brother has some new leaves, and there may be things going on with the stems growing new stuff, but this is the first actual flower since the great drowning of August. Maybe it’s a sign.