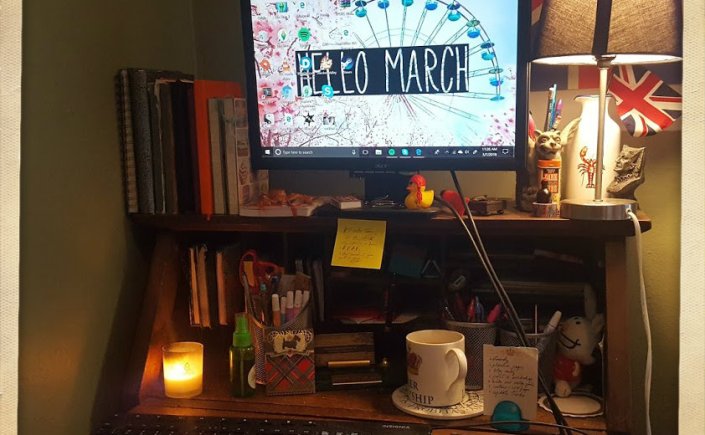 This still counts as Wednesday’s entry. I’m writing it on Wednesday, for one thing. Okay, it’s near the end of the day (4:25 by my clock) rather than the beginning, as I’d planned, but there is white stuff falling from the sky outside, at an impressive rate, and the day had to be re-apportioned accordingly. This meant a morning spent at the laundromat, oddly deserted for the morning of a storm, and other domestic matters. It’s all good, though, as we are amply stocked with tea and candles, I have a fluffy blanket on my lap, and a perfectly firm pillow in the small of my back. and a few things on my mind.

Most of them are related to reading and/or writing, specifically historical romance, so I still count this as technically on time and on topic. Though my immediate to=be-read list stood at twenty-seven as of yesterday, it has grown since then. Other books by two of the authors on my shortlist are partly responsible for that growth. Another contributor is my recent viewing of an Australian TV series, Glitch, that made me remember how much I love reading a good Australian historical romance (of which there are far too few available these days, hint, hint, especially Australian writers, hint, hint) and the fact that I am but one chair swivel away from some select Candace Proctor titles in my TBR bookcase. I am currently reading two Tudor-era titles right now, one historical fiction with romantic elements, and one historical romance. The historical fiction has six subsequent books (to date) and the historical romance, one more. Then there’s my upcoming O’Malley binge, and who knows what after that.

Yesterday, at my weekly breakfast with N, I rambled about a vague idea for a holiday historical romance. This is the vaguest of ideas, at present, no historical period attached as of yet, but hey, a blizzard could work in there, sure. I’ve been wanting to write a Christmas story for ages, but this one might actually work better as a New Year’s story (still counts as during the Twelve Days of Christmas, so I may still be on task.) I don’t know who my hero and heroine are. I don’t know what era their story takes place in, but I know it’s a winter holiday; that’s a start. It’s also probably going to be my Camp NaNo story, but I’m not quite ready to declare at the moment. Give me a couple more days of pretending there’s an out.

There isn’t, of course. Getting a story from vague wisp of an idea, to bullet point draft, in a specified period of time, scares the stuffing out of me, so of course that’s what I’m looking forward to doing. Kind of like a twenty-seven item and counting “short’ list for the foreseeable reading future. Right now, I’m listening to songs from a playlist I’ve been studiously ignoring for coughty-cough months now, because a story (or two) is haunting me (not the Christmas/New Year/Camp NaNo story, because that would make sense) and I’m not sure what I’m going to do with that.

Write it, of course, because the not-writing has not worked out terribly well. Goes hand in hand, is my educated guess, with the re-examination of favorite books, and books I’ve been wanting to read long enough for said desires to be old enough to vote. Apparently, they did, and the vote was to quit messing around, and get down to business. Maybe it’s the snow. I have fond memories of walking around a town whose name and location I have long since forgotten, with Real Life Romance Hero, after we bailed on the evening’s planned activity.

I was not equipped for tromping through heavy snow that night, in a pair of stiletto heels and knee length skirt, but my coat was warm, and I had RLRH. The night was dark, the falling snow glittered in the streetlights, and, somehow, though the streets we wandered (never too far from the venue from which we bailed, because the other couple we came with was our ride) up and down unfamiliar hills, an idea took shape. That idea eventually became a story that became my first novel length fan fiction, and unleashed a whole lot of writing, and paved the way to my first published novel (no relation to the stilettos in the snow story.) We did eventually return to the venue, and I’m still not sure if the other couple knew we were gone. They asked if we had a good time, we said we did. I vaguely recall diner food after that, and then we went home.

Right now, it’s white outside my office window. A quick check of a weather app says we are due for upwards of twelve inches of snow. I do have stilettoes, and RLRH is home, but we’re staying inside tonight. There will be comfort food, and there will be reading, and there will be writing, and then we will see what the morning brings. My educated guess is that it will bring the shoveling of aforementioned snow. Depending on whether our downstairs neighbors, young men who have a step troupe, are home, I may not have to be the one wielding said shovel. If I am, that’s fine, because shovel time is mull over story stuff time. I could do with some of that.