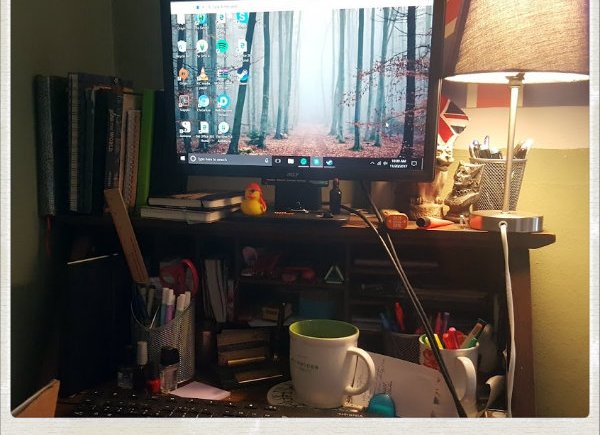 Welp, it’s a Monday. I have the big mug out, second dose of Lapsang Souchong tea to fuel me, because I’m going to need it. Right now, I am in my office chair, under the Irish fisherman blanket Housemate knitted for me and Real Life Romance Hero. I am wearing an oversized sweatshirt, hood up over my sleep braids, flannel pajama pants, and thick socks. Tomorrow, N and I are shifting the focus of our weekly meetings from planning/critique, to actual live writing. I may or may not still have a free birthday pastry on my Panera card, and, although I am cutting back on sugar, there may still be a cherry Danish with my name on it.

Last night, I watched Outlander with Housemate, in the living room, at the same time, something I haven’t done since I started recapping the show for Heroes and Heartbreakers. It’s a different experience, not only knowing that I did not have to recap (would not have been recapping that episode anyway, as it was an even numbered episode) but knowing that I would not be recapping next week. Oh. Right. That happened. Watching as a fan is a different matter than watching to recap for a website post. No need to count scenes where the OTP are together (zero, for this episode; some habits are hard to break) or write down memorable quotes (Nothing on that front, but the final stitch on a sailor’s shroud going through their nose, and that it needs to be performed by a friend, that, I remember.) No need to chart the course of the ship (as in relationship, not the actual sailing ships, but those, too) although Claire has a plan to warn Jamie, and Fergus chooses an interesting time to man up, but we will see how things go.

I also didn’t  watch as closely as I would for a recap, though I will be interested to see if I’ve trained myself to do that when next week rolls around. Some habits are hard to break, and, as I look for more freelance gigs, this may be a skill that comes in handy. One never can tell. I am not ruling out a re-watch, possibly on a smaller screen and/or closer to my face. This may mean moving the comfy chair closer to the TV, as well as a trip to the optometrist, but rearranging furniture counts as a creative pursuit, right? I’m going to say it does.

That’s not for today, though. Today is for working on Drama King and getting ready to work on Her Last First Kiss tomorrow. N and I have already extended our meeting time so that we can allow for more writing time. Having another person across from us, doing the same thing, expecting there to be more story than there was when we took our seats and opened our notebooks, is a powerful motivator. No distractions, no quick checks on Facebook or other social media, no looking something up on the internet real quick, only pen to paper, and the knowledge that we get to talk about what we’ve written, immediately when we’re done writing it.

This reminds me of a writing group I attended, for many years, with M.P. Barker, and Melva Michaelian, where we came to the group with paper and pen (no electronics) and wrote to prompts (or not; going rogue was allowed, as long as we wrote) for a set amount of time. I want to say it was about fifteen or twenty minutes at a stretch, and we would have two such sessions, with a break to chat and snack in between. I liked that dynamic, both the actual writing, and the knowing that, while I put pen to paper, the others were doing the same thing.

Even on evenings when getting into my groove took longer than I’d like, I eventually did, because there was that energy of other writers doing their thing, of being surrounded by others of my kind. I was, to my knowledge, the only writer in the group with an eye on a career writing historical romance. I have a talent for being a unicorn in these kinds of groups, the only X in the bunch, whatever X might be for that particular bunch.

I do get semi-unicorn points for my meetings with N, as she is writing contemporary romance, and I am writing historical, but it’s still romance, and N does have some historical projects in the pipeline, so only semi-unicorn. Half unicorn? Unicorn/horse hybrid? Is there a name for that? Halficorn? Theoretically, can unicorns and horses breed? This is not a question that I spend a lot of time pondering, but it does arise now and again. I don’t think I’m the only one to have this question, in the entire time of human existence.

Today will probably be a day for filling the big mug yet again, as I put on the big girl panties (flannel today, because we are now in late November) and move the Drama King scene from notebook to screen, then get my notes ready for tomorrow morning, so I have a roadmap for the new scene. Today feels, to a small extent, the way I felt riding home from that long-ago writing group. There’s that same flutter in my stomach, that yes, that this buzzing around me, the story people as real and alive as the person next to me, hands on the steering wheel, bright as the headlights that cut through the dark, as we talked about where our respective stories were going, what we’d written that night, what we planned to do with that during the week to come.