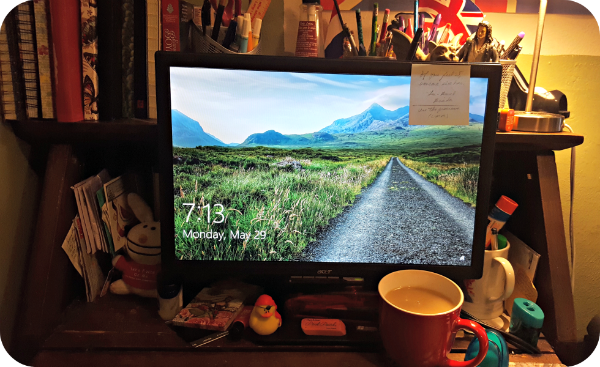 Use the process.
-Lin-Manuel Miranda

Today is Memorial Day. It’s also May 29th, the birthday of Erma Pesci Carrasco, and Princess Marlena of Carousel. That would be my mom, and one of the two German Shepherds my dad and I got the year I started college. Marlena decided pretty early on that she wanted to be my dog, even though it was my dad’s name on the official paperwork. The other dog, CJ, who came a few months later, while I was in school, followed her lead. I have no idea how that worked, other than that CJ absolutely adored Marlena, and if I was Marlena’s choice, well, then, that settled the matter. No further questions needed; it merely was.

I’ve been thinking about that “merely was” part lately, and not specifically about the dogs, though they were the illustration that came most readily to mind. They could both jump higher than the six foot fence of their enclosure, but both chose not to; they were fine where they were. The UPS guy did not understand this last part. To this day, I have a vivid memory of the blast of the delivery van horn that summoned me from the shower. As soon as I stuck my towel-turbaned head out of the guest room window, the driver shouted, “UPS,” threw the package onto the front lawn, and sped out of the driveway.

This puzzled me at first, until I went to my dad’s room and looked out of his window, that looked over the enclosure. Two purebred German Shepherds, jumping higher than (but not over, never over) the six foot fence, barking their fool heads off, tails wagging in doggy excitement; okay, I can see where that might be a concern for a UPS driver who did not know these were two gigantic marshmallow puppies, who had a whole  call and response routine perfected before they could have breakfast or dinner. It went like this:

Annnd scene. :takes bow:  The routine always went the same way: Marlena first, because she was the dominant dog, then CJ. The human in almost every case was me, as my dad did not take part in this particular routine. Maybe it was Real Life Romance Hero a time or two, as he came into all of our lives around this time. Possibly BFF in an extenuating circumstance, but the important thing is, no matter how many times I went away, every time I came back, they knew the whole routine. I’m pretty sure that CJ was, at least in part, merely emulating Marlena, because CJ was, how shall we put this, not the sharpest knife in the drawer. She came to our family because, although an utterly gorgeous pure black German Shepherd, she failed the puppy IQ test that would have allowed her to go pro. I’m serious. She once failed to notice a cooked chicken breast that had landed on her foot, until Marlena clued her in on that one. Marlena, on the other hand, was some kind of dog genius, so they balanced.

So, that’s where my brain is on this Memorial Day. I could say it’s gone to the dogs, and that wouldn’t be too far off the mark. Not that I’m thinking about dogs, specifically, but the fact that it’s Monday. The fact that Marlena and my Mom, who never met, have the same birthday. The fact that I have adopted the same pen as the author, and family friend, who got me into historical romance in the first place, always favored. Last week, at this time, when I sat down at my desk, dreading, as I would be now, shoving a whole week’s worth of work into one Monday (working on fixing that) I uncapped that green Marvy Le Pen, and wrote out what I thought she would tell me, if I could blabber to her over a cup of tea, about exactly that issue. I’d like to think I got it right.

There’s a purple ballpoint I’ve been eyeing , that reminds me of exchanges with a once upon a time friend. I don’t know that I’m ready for that imaginary conversation right now. Where once there were up to fifty page snail mail letters, eagerly anticipated,  now there is silence, paths diverged. I’m not spending a lot of time staring at the fork in the road, because it is Monday, and I do have several days of writing to cram into one, because tomorrow is Tuesday and N, and I am going to have pages, because I am black dog sure.

N does not have a pen assigned to her, or our weekly sessions yet, but they taste like tea (iced from May to September, hot from September to May, weather permitting) and French toast bagels, and I always come away from the sessions energized, because I’ve connected my characters and a reader/writer. It’s not just me and a page or screen anymore; now it’s a group of us. That’s part of the process, and it keeps me moving forward, so, once this blog is posted, it’s a short break, more tea, and then rework some of last week’s pages, before I catch the rhythm and forge on ahead.

Maybe I’ll end up awake into the wee hours again this week, and stumble home from my meeting with N like some over-caffeinated zombie, but even if the pages I bring her are a muddle, they’ll be my muddle, and they’ll make more sense after our talk. My brain generally needs to circle the airport a time or two before it lands, and rushing things doesn’t make the whole process any easier; quite the opposite. Better to trust that I’ve done this before, so of course I can do it again. This is how it works; relax and enjoy the scenery along the way. I’ll still get there. Left foot, right foot, that sort of thing. If, along the way, Hero’s hip happens to bump against Heroine’s as they take a totally platonic walk, and she happens to get a whiff of soap that does not smell like that on Other Guy, well, I’ll take that, too.