NECRWA 2017 is but a memory now, and I am already pumped for next year’s adventure. Melva and I arrived late on Friday, so we can’t speak to the hors d’oeuvre hour, but the author signing was tremendous fun, and I did get to speak to Alyssa Cole, buy a copy of An Extraordinary Union, as well as discuss diverse historical romance for a few minutes. Still salty I wasn’t able to make her workshop, but not to worry, she and co-presenter, Amara Royce, whose books are also going on my TBR list, will have the PDF available on their websites. I will be watching those like a waiting room full of hunting falcons watched the squashed hamster Joanna Bourne brought to the vet (don’t worry, hamster was okay, but that’s another story.) There’s so much more history besides only the Regency, that when I find kindred spirits on this, I latch on like a barnacle. Hopefully a productive barnacle, because this conference got me inspired to fill some pages and empty some pens/wear down some leads. 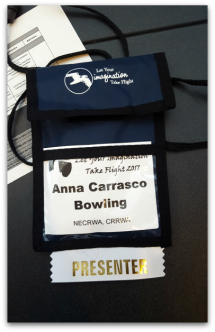 Even though arriving after the foodstuffs meant I didn’t get to attend any of the Friday workshops (though I did get a second shot at hearing Damon Suede on Saturday, and yes, he really is that amazing a presenter) I still got a thrill as soon as I checked in. See that nifty ribbon beneath my nametag? It is official, I have really and truly presented at a regional RWA conference, and there I am in the author directory. That went a long way to make up for not being able to hang out in either the readers’ salon, Hamilton sing-a-long, or even the lobby to gab with conference people. My back insisted on going upstairs to rest after the basket raffle. 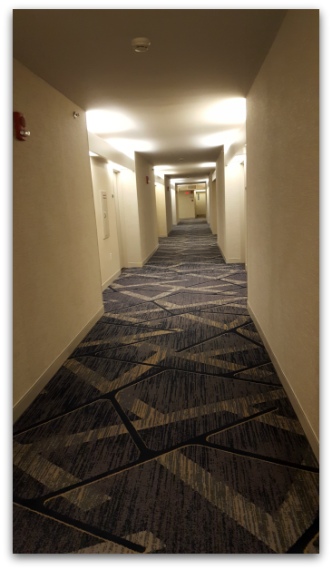 Melva dubbed the walk from the elevator to our room “The Blue Mile.” Door at the end of the hallway was not our room, but the stairs. With my back, stairs were not an option. Our room was around the corner from that.  Real Life Romance Hero had suggested I ask the front desk to bring up a banquet chair, in case the desk chair was too soft (it was) so I had a nice, firm chair to park myself for the obligatory swag shot. No, the postcard front and center is not Sleepy Hollow fan art, but goes along with my signed copy of A  Extraordinary Union.  Still super pretty, and I can’t wait to dig into the story.

One of my favorite parts of any conference is getting to connect with other romance writer friends, especially those, like my Last Call Girls (more on them later) whom I only get to see at the annual conference. It’s big, it’s loud, there is a good deal of shouting across tables, and, even when there aren’t any workshops going on, hanging around the hallways or lobby, in small knots, getting current on who’s writing what (Melva and I do indeed have a draft of the Beach Ball, now known as Chasing Prints Charming (sic)) meet new friends and meld social circles by introducing new friends with those we’ve known for basically forever.

I’d like to say I got a good night’s sleep, but a combination of back pain, end-of-book endorphins, and excitement over the day ahead meant I lay in a very lovely bed, my brain whirling with books and stories and writers and workshops and pitch sessions (I had one scheduled, Melva had two) and what on earth we were going to do for breakfast, since we were on our own for that this year. There was a certain amount of little-kid-on-Christmas-Eve feeling, because I was only one sleep (or in my case, lack of sleep) away from my first time co-presenting on a topic I love, with awesome co-presenters whom I also love. One lack of sleep away from my first pitch in the last few years, for the first complete book I’ve ever co-written. One lack of sleep away from brainstorming the next book with that same co-writer, because that was the most natural step after writing “The End” on the first one. Slight twinges of guilt from Hero and Heroine, but an assurance I’d be back to them, after shaking conference hangover, quieted those in due time. 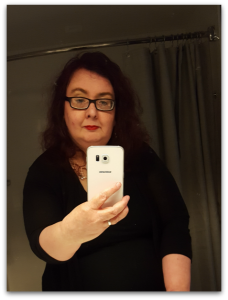 There’s a lot to be said for the work  our brains do when we have nights where we don’t sleep, and when that brain belongs to a writer who has arrived at a conference, there is a lot of that sort of work. Have I done the right writerly things this past year? I’ve written The End on two manuscripts. I am now seven chapters into the second draft of Her Last First Kiss. Chasing Prints Charming has a complete first draft, and already two requests for partials. There’s a presenter ribbon on my name tag, and, somewhere in that same hotel, there were people who had already decided they were going to choose that workshop over all the others offered at the same time. There’s some responsibility with that, because those other workshops were good ones (and yes, I did make a quick peek in the room where a certain other workshop would be presented, on my way to the bathroom immediately prior to showtime.

Not a lot of conference talk in this entry, I know, but it’s all part of the conference experience. Actual workshop and pitch stuff in our next entry. See you Wednesday.