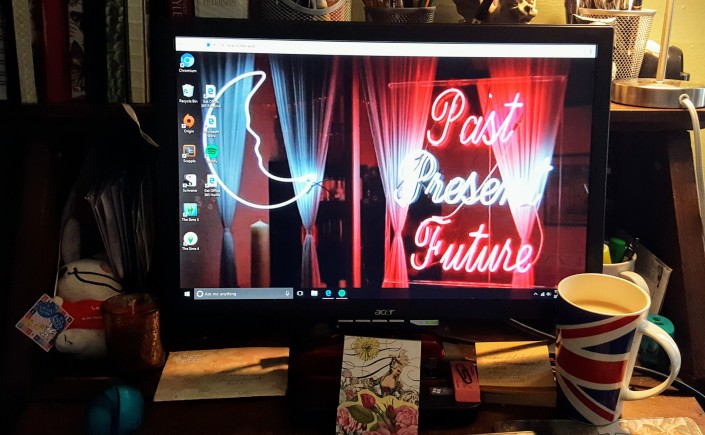 This week, N and Mr. N picked me up for the weekly critique session, so I wouldn’t have to tromp through the arctic tundra of the park, and risk bodily harm in the ice and snow. Good people, those Ns, but what actually happens? I twist my ankle on my way from microwave (occupational hazard of extroversion; food goes cold while blabbering, and needs to be reheated) to seat. I do not remember exactly what happened, but apparently, I was airborne for a second there.

I do remember my bagel getting some serious air and landing, thankfully, on the table, so no bagels were harmed, but my ankle is another story. My favorite Panera worker rushed over to make sure I was okay and had not hit my face on the table. I had not. I remembered enough to remove my boot in case of swelling (I saw none at the time, Housemate said there was some, when she got home that afternoon) and ask Panera Worker for an ice pack. Panera worker dashed into the back and returned with an impressive bag of ice, and the admission that they live with a nurse, so they know how to make these things. I propped my foot on an empty chair, plopped the ice bag atop it, and returned to bagel preparation. This particular ankle has been noodley since I was but a wee little princess, so this honestly was no big deal for me. Had worse, had wrap for ankle at home, had crutches if needed, I’m there, N is there, we have pages, let’s do this.

Since N and I have been doing this critique thing with each other for a while now, it’s no surprise that we’ve picked up on patterns in each other’s work. The word, “more,” comes up a lot. In Her Last First Kiss, Hero is an artist, and N and Mr. N are both artists, and one of Hero’s preferred mediums is one of Mr. N’s preferred mediums -I did not plan that, it happened that way, as such things sometimes do- so this is an extremely useful connection. In this scene, Hero is one gobsmacked fellow, unprepared for encountering Heroine for the first time, especially in the place and context, and he’s knocked off his axis by the experience.

N marked this passage as one of my “more” places. Hero needed to see more. Sure, it’s nice that Heroine has symmetrical features, but it’s more than that. Her hair isn’t  only “brown,” but sienna and umber and the color a perfect cup of tea is before the milk goes in, and he doesn’t have all his paints with him, but he’s in London, so he’ll have to go buy them and he doesn’t have a painting room here yet and uh, what did the other people in the room just ask him? He wasn’t really listening. Oh crud, she looks impatient. How long was he off in art world? Stuff like that.

This is good. This is stuff I need to know, to bring Hero and Heroine’s story and their world to life on the page. It’s also scary. That lush detail stuff is what I love in historical romance. 1784 people are not 2017 people. They have a whole different frame of reference. Hero is always going to see in terms of lines first and then colors. Heroine is always going to want to make order out of chaos (and Hero is pretty much a whole lot of tall, ginger, misunderstood chaos on two legs) so that’s always going to affect the choices they make, and the windows through which they observe, and participate in, their world. This is why I go for emotionally complex historical romance over, say, funny contemporary (which is a whole other skill set.)

At the same time, it requires silencing (or at least muting) years of “whittle it down” and “make it simple” and “fast, fast, fast” and other commonly heard pieces of writing advice, some of which are not as well suited for this kind of story. There is no writing cabal that has hard and fast compulsories on this kind of things. To put it in terms Hero can understand, I get to color with all the crayons in the box. The good thing about that is that the combinations are endless; I can dive in, go nuts, put hot pink next to red-orange and scribble gray on top of the whole thing. I can work it so that the difference between blue-green and green-blue makes total sense, throw a neon in with a pastel if that’s what the particular picture needs.

The scary thing about that is also that I can go nuts. More combinations means more combinations that could go wrong, and what if “they” don’t like it? Oh, but, what if they do? Ships in harbors and all that rot. I’d rather take the chance than be safe. As Critique Partner Vicki once said, “intentionally go too far.” It’s easier to take out than to put in, very much so. So that’s what I’m doing now. Making notes on where I can do that whole “more” thing, and then moving along as though I had already made those changes. I’ll get those on the next pass. My goal is to get this book out in the world, on an editor/publisher’s desk, or on the road to indie release, before December.

Am I going to fall somewhere on that road? Yes. That’s not what matters. What matters is that I get back up, ice that twisted extremity, and dive in as deeply into the characters and their world as I possibly can. Kind of appropriate that my ankle twisted before the critique session began, in that regard. By the time Mr. N came to collect us, I was ready to see if I could put weight on my ankle (I could) and Panera Worker came back by our table with a big smile and a free pastry ring, to make the day better. I’m pretty sure not all rewards of keeping on keeping on in this writing game come with cream cheese and cherry filling, but, sometimes, they do. 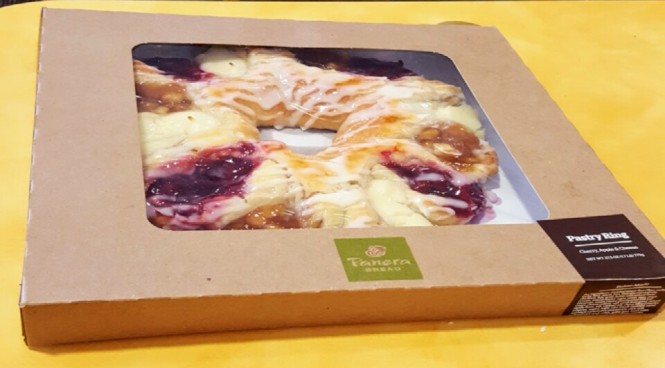