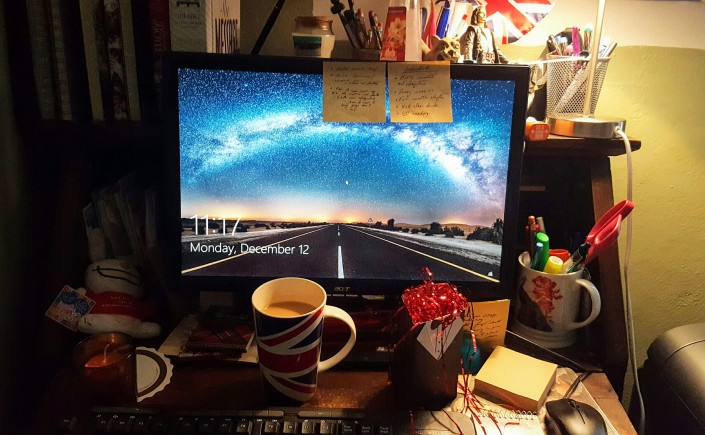 This past Saturday, Capitol Region Romance Writers had our annual member appreciation meeting. That’s when we gather together to celebrate everything our chapter sisters and brothers (yep, we got dudes) have achieved during the calendar year. There’s the big stuff – new releases, new contracts, first books, tenth books, twenty-fifth books-  and there’s stuff that may not seem as big on the surface, but is every bit as important – kept writing, attended a conference, gave workshops, volunteered for chapter or organization, etc- and the atmosphere is supportive and celebratory. My co-host, the fabulous K.A. Mitchell,( http://www.kamitchell.com/) cheered us all on, and suggested networking opportunities to encourage us to go better, harder, faster, longer for 2017. I love that stuff.

Not everybody participated in the survey of member achievements, and I get that. I almost didn’t, myself. Some people don’t want the attention, thanks, and, for others, something like this might give self-doubt a foothold, because other people are hitting these big milestones, and then there’s the person staring at the list, thinking they’ll never get there. Thankfully, the Hypercritical Gremlins seem to be keeping mostly quiet these days, and I only got a trace echo of “EVERYBODY WILL KNOW YOU ARE A GIANT FRAUD” because no, I’m not. I’m going to call that good.

I had wanted 2016 to be the year I could check off that I had my fifth published work. That’s not what happened. The only TARDIS I own is a night light (and even that belongs to Real Life Romance Hero) so I can’t go back to this past January and make things different. What I can do is go forward from where I am right now, which is not in so deep a hole I can’t get out of it. From a certain perspective, it isn’t a hole at all. I’m working on two manuscripts, have another, my postapocalyptic medieval novella, that really only needs an edit and formatting (okay, and a cover) to go all indie on 2017. I have posts for Heroes and Heartbreakers slated, I write a weekly discussion post on the topic of romance novel reading every Saturday (barring technical difficulties, that’s about fifty of them a year, baby. 5-0. Not small potatoes by any means.) I blog here three times a week (okay, fine, two entries from me and one from Skye, but I do have a blogging cat, so that’s something special right there.) Even so, could I have done better? Well, I hope so. If this is the pinnacle of my success, I’m going to go cry in a blanket fort (but I’m taking my computer with me, so I can play Sims.)

There’s only a few weeks left in 2016, so I am looking 2017-ward from here. Not going to lie, I want to be one of those, at next year’s member appreciation meeting, walking away with one of the big prizes. If I release or sell a book to a publisher, that puts me at fifth published work, and that does get the big prize. (There’s actually a choice, and one of said choices is a padfolio. Anyone who has known me for more than about five minutes knows about me and stationery. New readers who do not, check the AnnaLog tag. It’s all there. )

So, how do I get there? Dragging out the old Japanese proverb of a journey of a thousand miles beginning with a single step feels cliché  (but things are cliché because there is an element of truth to them) so, instead, I am going to use a favorite Dutch proverb instead. Pray to God and row to shore. Finishing a book means writing a book. Slapping the duct tape over the Hypercritical Gremlins, boarding over their closet (spray painting “Don’t open, dead inside” a la The Walking Dead is optional, but adds a certain degree of panache, as well as a much needed reminder in the weak moments.

I’m still not sure exactly how I’m going to organize the work, but meeting goals is the same as eating an elephant. One bite at a time. For those who are fans of Anne Lamott’s Bird by Bird, think one-inch picture frames. Little bits. Remember I’ve done this before. Remember the encouragement of chapter mates. Remember what it feels like to hear from a reader who connected with my story, that I’m not shouting into a black hole, after all. Remember why I started writing in the first place. Remember what it felt like to send that first manuscript off to the very first publisher, and what it felt like to open The Email, the one who actually bought Dalby and Tabetha’s story. If a hermit and a subsistence farmer can find love, there’s hope for all of us, I’d imagine.

So, that’s how it’s going today. Blog entry. Article. Would love to get some fiction in as well, and if the end of the day comes before then, that only means I know what’s first on the to-do list for tomorrow.

2 thoughts on “How to Eat an Elephant”