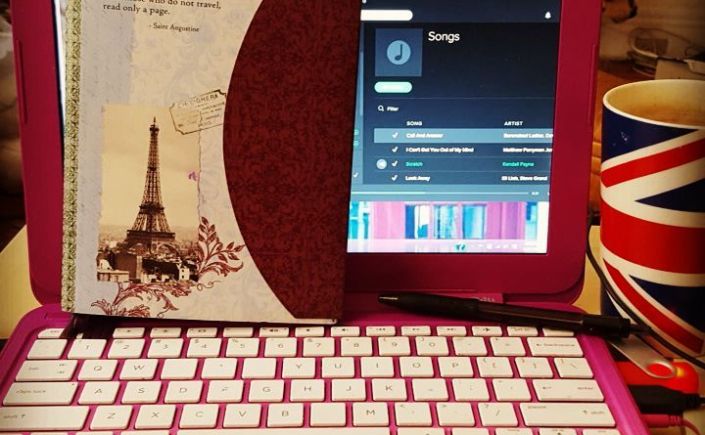 Today almost ended up being a video blog, but I know myself, and that’s going to have to wait for later. What’s on my mind today is -are?- a bunch of things. There’s no time tomorrow, the last day before the conference, to sneak in an entry, and so it needs to be today. I have one ear open for the doorbell (as if anyone can miss a big ol’ prewar doorbell that vibrates the walls and scares the stuffing out of the cat…and the me, because yikes, that thing is loud. Effective, though.) because I’m waiting for a delivery for something Real Life Romance Hero ordered and the rest of my head is…not scattered, exactly. Lets call it multitasking.

We’ll jump right to something from my morning pages (in italics):

That’s where I feel I am now, coming back home in a different season of my life . A lot of things are changing. Some people who were always there, are now elsewhere. New people have moved into some of the vacant houses. At some point, this will be the way it’s always been.

Last night, I chatted with a writer friend, about a scene in her WIP, the emotions so finely honed that it viscerally shook me, made me first think A) well, crap, I can’t top that, and then B) I want to do that. Not top her work, because it’s not a contest. What I do want is to create my own version of that. Get that kind of response. Be that deeply involved with the characters and emotions and elicit the vivid sensory images. That kind of thing.

Her scene affected me so much that, a good night’s sleep, walk through the park, daily pages and half a blog entry later, part of me is still back there, not yet ready to leave it. Wanting to draw some of that in and make it my own and put it back out, mingled with my people and my era and their story and and and and…yeah. Writers, you know what I mean. Readers-who-do-not-write, it’s too late for us; save  yourselves.

It’s not the only thing that  has me under the influence, either. There’s a new picture in my inspiration folder, that I’m still not sure why I like it as much as I do, but I keep coming back to it, so there is something in there, even if I don’t know, at this point, what it is. I don’t have to know; figuring that out is part of the journey. There will be time spent staring at it, thinking about it, isolating different parts so that I can see them from different perspectives, trying on and discarding lyrics and quotes and looking at and looking away and thinking and feeling and not-thinking and not-feeling and putting it on the back burner until it tells me.

I keep coming back to this idea of homecoming, this place that is familiar-but-not. Keep coming back to the magpie stage, gathering this and that and incorporating it into what I already know. Into what I don’t yet know. It’s…not weird. Not strange. Not familiar, either, but familiar all the same. It’s part of the process. Knowing that not-knowing what I’m doing is exactly what I need to be doing, and knowing that it’s going to be different every time. Knowing that that difference is always going to be a constant. Knowing that, even though I may shy at this jump, I’ve taken it before, and  I can certainly take it again. Knowing that another lap of the place is what I need to build up the speed for that jump. Knowing that my metaphors are going to muddle. Knowing that they are going to mingle, along with pictures I don’t know why I like, songs that grab me from the first note, the scent that grabs the reins of my attention and pulls hard while I’m doing something completely unrelated, and, without my conscious effort, there I am, fully absorbed in the world of the story. Inside the characters’ skins, living their story with them. That’s home.

2 thoughts on “Call and Answer”