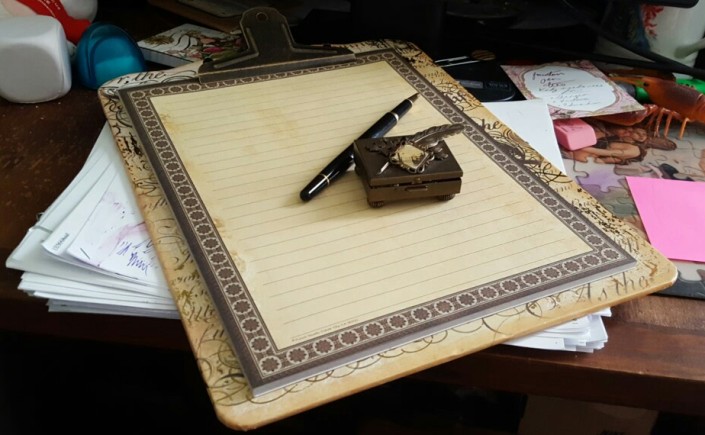 I have a lot of pens. I mean a lot of pens. I probably picked up some of this from my dad, who was an artist, as I have vivid memories, still, of sneaking into his studio when I was but a wee princess, stealing various mark-makers (pens, pencils, higher end markers, etc) and putting them back exactly where I had found them so he wouldn’t know I’d even been there. If he did know, he never said, but I do suspect I was mostly successful. My pilfering of his papers was harder to camouflage, because, well, paper, but suffice it to say, if I were a dragon, I have no doubts what I would hoard. Pens and stationery. Well, books, too, but that’s another story. Pun intended.

My family is well aware, that, in case of Walking Dead style zombie apocalypse, we are heading to NYC, because I want to loot the Moleskine store. Also any other stationery vendors we encounter along the way, because Papaya! Art, Punch Studio, Markings, Picadilly, Anna Griffin, etc. I am hardwired for this stuff, and make no apologies.

Most recently, I have fallen down the fountain pen rabbit hole, and am waiting for two different orders of ink cartridges to arrive in the mail. I’ve said before, how writing longhand, and specifically with a fountain pen, adds an extra something to getting in the historical world of my characters -though I can also be found making notes on my phone, so I’m not a total Luddite- and I have seriously considered trying a dip pen, to get even further connected to the methods of writing my characters would have known. 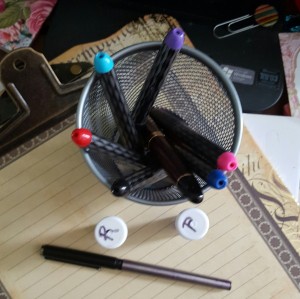 The fountain pen gang, as it currently stands, minus my Pilot Plumix, which started the whole love affair, and is now in hiding. Perfect timing, as I have an order of sepia cartridges for that particular pen winging their way to me right this very minute. Ahem. Pilot Plumix, Mommy loves and misses you very much. Please come home. All is forgiven.

On the way are: 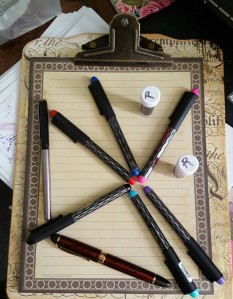 N has helped me troubleshoot the MontBlanc, and suspects that the reason it’s not drawing ink is that the suction on the converter may be all done, a small rubber part having given all it can. Considering that this pen was made in 1971, I suspect it’s had a good run. I’ve done some research on what refills it might take, and have my eye on a lovely set of burgundy cartridges by MontBlanc. Failing that, it looks like the pen should take international standard size, so there’s that option.

I am very new to the whole fountain pen world, still a wide-eyed newbie, and yet, I have an excitement that sparkles my blood when I babble about, use, look at, research, etc my pens. Inking the MontBlanc or Jinhao is a special ritual, one I look forward to, that honors the writing I do, both personal and commercial. It’s not the tool that makes the craftsman, not by any means, but there is a certain recognition, a this is mine knowledge that goes beyond mind, into heart and soul. Does that have an impact on the content of the writing? For me, I have to say yes.

The featured image  at the top of the page is not a fountain pen, but a rollerball, a gift, as part of a business card holder with plaque, that was a gift from a once-upon-a-time friend. I’d loved the pen, and was disappointed when the ink ran out. I want to say there were a couple of refills included, but that was another life, and the mist is heavy between that time and this. Nevertheless, I hoped I’d track it down someday, and, recently, by accident, I did.

I’d hoped to get a refill for a totally different pen, and picked up the wrong refill. I tried it anyway, but pen and refill were not compatible -different makers- and, again, I was sad. then I had a whim – why not try it on that pen? I did. Perfect match, and, as is super important to those of us who love pens and are not independently wealthy, super affordable. Win-win. I wasn’t sure what I was going to use it for, but, when I sat down this morning to write to a friend, my gaze drifted from the cup of fountain pens, to the glossy black barrel, then down to the pad in front of me. Then the pen was in my hand and we danced. The pen did, that is, and by danced, I mean moved across the paper, but pens don’t do much without hands to move them, and, before I knew it, seven pages were ready to wing their way to their intended recipient. It felt right.

Last night, I chatted via Skype with a writer friend, partly about a scene that wouldn’t come and wouldn’t come and wouldn’t come. The computer had eaten the original document the scene was from, jump-drive-that-is-on-its-last-legs says that copy is corrupted, and really, that’s pretty much a sign when that happens. I told my friend that I knew what I had to do next. Shut off the word processing program, plug in my earbuds, and break out pen and paper. Time to dance.