Hello, all. Skye here, for another Feline Friday. Anty is on a tight schedule today, with hunting for food (she hunts at a place called the “supermarket”) and writing things. She has some research to do for some upcoming articles, and then there is book work, which she thinks really ought to come first (I agree) but she also likes to be the strangest person in the Laundromat, so she likes to do the laundry early. Laundry time is very good time for Anty to sort through ideas in her head, and, if she has her headphone in, and keeps her head down and pen moving on the paper, people generally leave her alone to do exactly that. Well, sometimes, almost-grown-ups ask her how the machines work. If the owner is there (he was not there today, but the custodian was) she will chat with him some.

This week, Anty  has a lot of feelings about what happened to Morgan and Garcia on Wednesday’s Criminal Minds, (or what will apparently not be happening between them in the future, because the writers decided to…what? Oh, sorry. Anty says no spoilers, so I will stop there.) but she did not have to write an article about that, so I cannot give a link to an article that does not exist. What I can say is that she and Uncle had a grumbly conversation about it yesterday -they are both on the same side, so it was not an argument- which showed Uncle’s impressive grasp of romantic arcs and character dynamics, as well as genre expectations and creative choices that limit options once a path has been chosen. Spend enough time around Anty, and these things tend to rub off on a person. Or kitty.

As Anty’s mews, I spend a lot of time around her. Pretty much all of it, except when she leaves the house, since I am an indoor kitty and only leave the house when it is v-e-t time.  It is not v-e-t time now, so I have an up close and personal view of her creative process. When writers get to know each other, they will often ask if they are pantsers or plotters. That means, do they make things up as they go, with no firm plan (or a very loose one) or do they plan things out ahead of time? Anty has come to learn that she has to give a different sort of answer to that question: she is a puzzler. That does not mean she stares at  a blank screen or page and puzzles over what comes next. Well, not all of the time. 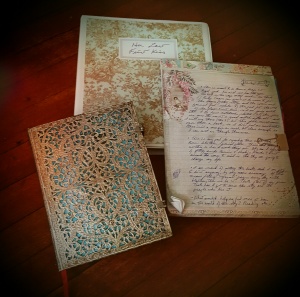 these all fit together

What it does mean is that Anty does not always work from beginning to end. That may sound crazy to some -it did to Anty, at first- but that is how her brain works. Finding things that look like her story also help give Anty visual cues. Since Hero in Her Last First Kiss is an artist (she wanted him to be a musician, but he said no; Anty did not mind too much, because when characters tell her she got them wrong, that means that they are alive inside her head, which is  a good thing.) the visual cues are even more important. They are another piece of the puzzle, and working in notebooks that look like the story helps her feel connected. That is why she is going to hunt at the craft store for some toile patterned cardstock so she can make better dividers for the binder where she keeps important story information. I like that, because I get to play with the strips of paper from the bottom of the cardstock; they are really fun toys. Anty holds one end and wiggles it, then I bat the other end with my paw. Sometimes, I get so into it that I even go back on my hind legs. Since my balance is sometimes special, sometimes, I fall over, but I get right back up, because I like to play that game. Falling over is worth it.

Anty is like that with writing. At one point, she thought that being  punster was the ‘real’ creative path, and she tried that, but she soon felt like she was lost in the middle of the ocean, and did not know what was going on. Some of the stories during that time did not make it. Then, she tried plotting, and that worked better, but the stricter she tried to be with it, the more restrictive it became, and then she found that she could not move. Well, write, the same as when she tried to pay strict attention to word count. I think those actually happened around the same time.

This week, she played with index cards and listed scenes, then transferred that to her binder, color-coded, so she could see where she was missing things and what had to happen when. It literally can be a puzzle, when she sits on the floor with her index cards, or puts sticky notes all over her plotting board. When she can see what is missing, then finding out what goes there is a lot easier. That is probably why she has lots of sticky notes all over her notebook pages, because when the puzzle pieces start fitting together, they really start fitting together. Something that comes clear to her about the end of the book could fill in a hole about something she did not know near the beginning, so she can go back there, put down a sticky note and come back to it on the next pass.

I do not mind this at all, because it means more paper for Anty, which means more toys for me. Granted, I am in one of those learning how to play again phases, but Anty says that fits with her relearning how she works best. I guess that means we are in sync. That is about it for this week, so, until next time, I remain very truly yours,