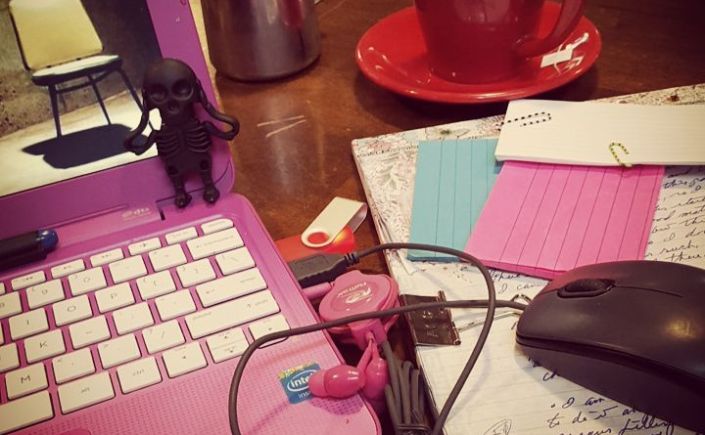 Rainy Wednesday here, and the fact that I’m only now getting to the first blog entry of the week should be an indicator of how things have been going. The new addition to my workspace is Hedwig, (thanks, Kara!) who has shot up to mascot status in short order. Lift his head off, and he’s a flash drive. He will soon be filled with novel stuffs.

No idea what I want to write about here, so I’m going to wing it. One of the most vivid rainy day memories I have carried for a long time reaches all the way back to fifth grade. We’d recently moved from Bedford Village to Pound Ridge, and I had a playdate with Elizabeth A, to keep us both occupied and our mothers sane for the rain-soaked afternoon. I remember I had a corduroy pantsuit (it was the seventies; don’t judge me, and yes, my mom picked out my outfit) that day, red with a flower print all over it. The legs were too long, so the hems of the trousers (I preferred skirts even back then, but mom said, sooo…)were damp the rest of the day.

We spent the afternoon in Elizabeth’s room. I remember Barbies and some imaginative play, some discussion of the new TV show we both liked, Wonder Woman, probably my first fandom, though I didn’t know what fandom was at the time. Elizabeth had a Chow dog, who had particular tastes in what interactions he would allow with what humans, but he always liked me. I don’t remember his name, or the name of Elizabeth’s older brother. I don’t remember many particulars of that day, but I remember the day itself, and the memory is a good one. Elizabeth A, wherever you are, I hope you do, too.

On this rainy day, years later, there’s imaginative play still. Now, I call it writing, and it’s work as much as it is play, which suits me fine. No red corduroy pantsuit, thankfully, and I’m writing this from my favorite coffee house instead of a friend’s bedroom, but the day has some of the same feel to it. Not that I know exactly what the connection is, but some things become a part of us, and come to the fore when they will.

Today is also the first anniversary of the passing of Bertrice Small, still a favorite author and my entrée into the world of historical romance. I’d wanted, as many Small fans, to dive into some rereading when we got the sad news, and, at the moment, I’d tried, but I couldn’t make the connection. Not a good feeling, but, at times, the best thing we can do is let the feelings do their jobs. I don’t know when I got it in my head that I would intentionally step back from reading an author whose work had been that important to me, or when the idea arose that I would resume on the first anniversary of her passing. Maybe it’s a form of literary mourning? I’m not going to question that one.

Once I knew I wanted to resume on a certain date, everything fit. I would pick up one of her books on that date, and I would read it, but which one? With forty-nine titles from which to choose (well, less than that, as the Lara books are in storage, and I don’t own the Channel titles) the options were too many. N’s advice, “make a decision,” came to me then, and I did. I decided I wouldn’t decide. I turned to my Lionesses at my Facebook group, The Lion and Thistle, and placed my choice in their capable hands. 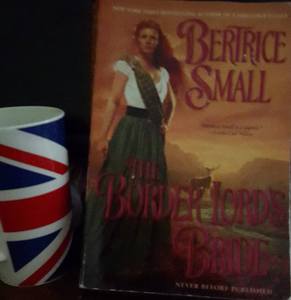 this is the one

Some of the suggestions, I’d expected. Skye O’Malley (the book, not the kitty) is my favorite, and The Kadin was the first historical romance I ever read.  I know those books, can quote them in places, so re-reading them would be as much remembering as experiencing the story. The other choices offered, Deceived, and The Border Lord’s Bride, I haven’t read as much. Since my copy of Deceived seems to have gone walkabout (will be reaching out to the library system and/or used bookstores soon) my choice became clear. I hadn’t remembered, until I plucked my copy from my special Small bookcase, that this was the second story in the Border Chronicles, not the first, but since it’s an extremely loose connection, I’m letting that go. I can read the prior title, A Dangerous Love, later, if I want. I did put my choice in others’ hands, after all.

As with that long-ago rainy afternoon, I remember the book more in general than in specific, and it’s a different experience. The last time I read this book, it was 2007.  A few things have happened since then. My critical mind is along for the ride, and has some issues with tell-y passages and instances of passive voice, but the voice itself, that’s as familiar as I remember, a welcome back to the things that drew me to historical romance in the first place. It’s also made me schedule reading time in my day, something I’d wanted to do, but put off actually doing, but if I want to make time to read all that I want and need to read, there has to be time where that’s all that I’m doing. This is different from pleasure-only reading; it’s also research. 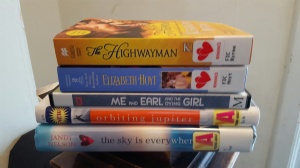 In a way, that’s my equivalent of the art student camped out in front of the master’s painting, sketchbook in hand or canvas on easel. What did the master do? How did they do it? That thing that was never recorded, what was it? Can I do it, too? What does it look like when I do their thing, my way? Reading time, writing time, headphones in, laptop on, paper and pen at the ready. Let’s do this.