How I Thought It Was Going To Go:

That magnum opus I pounded out on an electronic typewriter, in my dad’s living room, my old bedroom, and my first college dorm room, heavily reminiscent of the Bertrice Small epics I still adore, complete with fictional island nation, slaved over for years, was supposed to be The One. I had a chance to send the first three chapters to a big name editor, and I did. I remember sitting on the couch of Real Life Romance Hero’s and my first apartment, the letter in my hands, unopened, knowing that this would change my life forever. It did, but not the way I had expected.

Not enough action, nothing important happened, something else, something else, something else, probably something positive in there, but danged if I can remember any of it all these years later.  What was supposed to happen was that Big Name Editor was supposed to love this story as much as I did, want the whole thing, throw a big bunch of money at me and ask for more books. Never mind that I had no idea what those books were going to be, because that one was my everything at the time.  What I do remember is the crushing disappointment, the “proof” that I couldn’t do what I wanted to do more than anything else in the world. Totally skipped over the “send me something else” part, partly because I was that crushed, and partly because I didn’t have anything else at the time. This was meant to be the one that flung open the doors and got the party started. Surely, then, everything would come easy after that.

I went into retail. The book went into the briefcase a family friend gave me for my high school graduation, and then into the back of a closet, eventually into a storage unit. I stumbled onto the path of retail management, but when the district supervisor called me in for a talk, to ask about where I wanted to be in five years, I said “writing.” What? I didn’t want to manage my own store? Umm, okay, I guess, but mostly writing. I ended up as assistant manager at that store, and I discovered fan fiction, where I wrote. A lot. Where I learned a lot through that writing. Where I made friends who also wrote. We taught each other. We experimented. Belly flopped. Blinked in astonishment when readers asked for more. Provided more. Learned how to hawk our wares at appropriate venues, used the heck out of the USPS to stay in touch, fumbled through the early days of the Internet together, and, sometimes, met in person.

Through one of those meetings, I found a local writer’s group and was invited to join. I did. Week after week, we met and wrote to prompts, in timed exercises. One of those clicked, and kept going, eventually becoming My Outcast Heart. My first shot at a historical romance since that book where nothing happened. I queried Awe-Struck Publishing, sent in a partial, and sent in the whole thing when asked. Less than a week later, I got The Email. A real, live publisher wanted to buy my book! Um, yes, please. Then when one of the editors started his own boutique publisher and asked me for more, I sent more. I wrote two novellas and another novel, and all went out into the world and found homes.

Then life happened. I became caregiver to three relatives at once. Two passed away, while the other and I learned to manage the conditions newly discovered. There were matters to settle, a move to be made. My own depression was in there somewhere, along with some anxiety, and more miscarried manuscripts than I care to count. Not my favorite time, and sure, I wish I’d done some things differently. Sold  a few books, that would have been nice, but I’ve written articles and blog posts and not going to lie, I’m proud of those. I kept writing books. Not all of them made it, and that’s probably a good thing, but I kept on going, finding things that didn’t work and looking for things that would.

How It Goes From Here:

You’re asking me? This is the person who cried when the survey showed up in her mailbox. The one who grumped about not wanting to go to the meeting, but I had to because I was part of it. Everybody else is more successful than me and what right do I have to walk in the midst of them, so leave me here in my pile of sludge to die. Which is A) pretty much what it felt like, and, B) shines a light on how  much I want this.  Seeing as how I did tick a few boxes, I think I’m doing okay.

I’m still here. I’m still writing. I’ve been getting some good rejections on a novella, and “loved the voice and characters, but…” is a far sight better than “nothing happens.” I got a workshop I love out of lessons learned from all the fanfic I wrote and edited in those post-rejection days (which, to be honest, were all historical romances in disguise anyway) and, as my mother told me often, the year I broke my right arm (and, disappointingly, did not learn how to become completely ambidextrous during the healing process) broken bones heal stronger.

Write, finish, submit, repeat. Old advice, still works. If I get one new release this year, by traditional or independent publishing, I will indeed reach the fifth release goal. With a whole year ahead of me, and a novella in search of a home, this could happen.

We were asked, during the meeting, to make a list of our goals for the year. These should do. 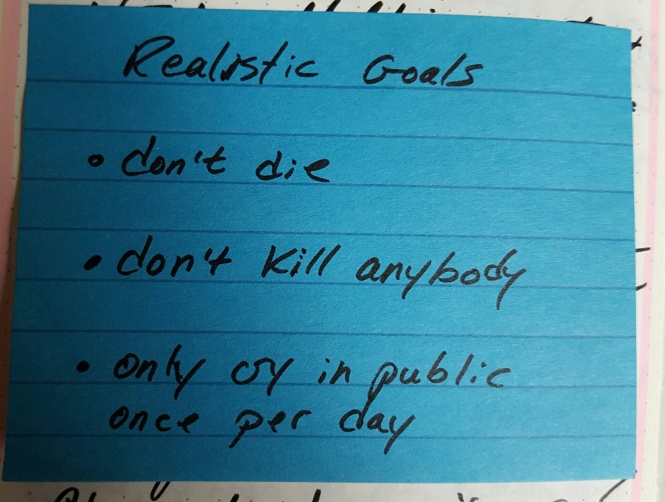 Okay, I made specific writing related ones, too, but it’s been  a rough weekend. Feeling good about these so far.

2 thoughts on “Past Present Future”