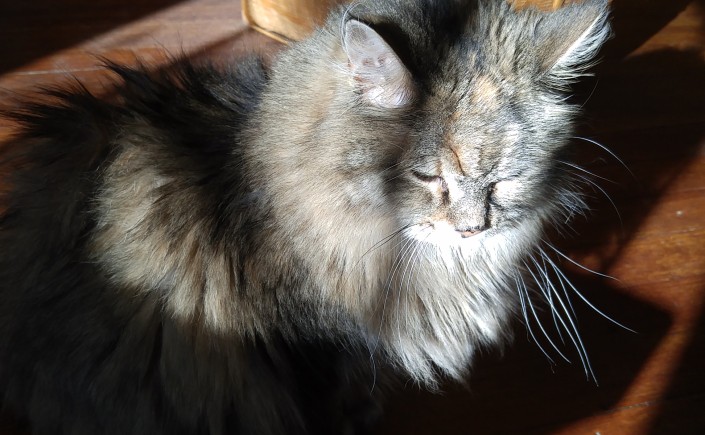 Hello, all. Skye here, for another Feline Friday. Things are taking a definite swing toward fall this week. The sidewalk part of the construction is finished in front of our house, so it is not quite as noisy and the floor does not shake as much. Anty is very happy that there is actual sidewalk now, so she can wear heels when she leaves the house if she wants to, without risking ankle death. Construction is not completely done, as they still have a giant pit in front of the house next door, and we still have new trees to be put in where the old trees used to be. New trees means birdies will come back. I love watching birdies in the morning, so I am excited about that.

Anty does have a funny story about the day they poured the cement, and she said I can tell it, because it is really about me. Uncle was home until dinnertime that day, so Anty went to write at the coffee house. When left the house, she noticed that there were big mesh things laid out in a grid pattern on the gravel in front of our door. That told her they were probably going to pour the cement soon. She did not know how soon, because, when she got home a couple of hours later, there were men in big rubber boots almost to their knees, spreading the cement around. I should mention again that I am an indoor kitty, and Uncle had already left for work.

Anty was very concerned about being able to get in and take care of me. There was cement everywhere, and the workers were not happy about having to find a way for her to get across. One of them asked if she could please use the back door (I do not think he said please.) Anty said that she could, but she would have to go into the back yard (it is really tiny, because we live in a city) to get to the back door and the gate to the back yard is right next to the porch, so she would have to get across the wet cement sea anyway. The workers grumbled about having to put boards across it, but then she said the magic words. She had to get inside and feed the kitty (I am that kitty.)

Well. The workers put two boards up, side by side, and let her hold their hands so she could keep her balance as she walked across them. Anty thanked them and came inside. I got my meal (it was cat food, which is my favorite) and Anty got some more writing done. I love a story with a happy ending.

So does Anty, which is why she writes romance. She started reading romance when she was still a person kitten, only eleven. That first book was The Kadin, by Bertrice Small, and she knew right away that she had found what she wanted to read and write for the rest of her life. She says so far, so good. Anty may give the humans in her books a lot of problems, but, because it is romance, she fixes them by the end. Reading romance novels written by other humans is something that Anty loves  do, but has not had a lot of time for this summer, but now it is almost fall, so she is looking at reading more romances, especially historical ones.

Some humans like their historical romances to be what they call ‘wallpaper.’ This term confused me at first, because I thought it meant that they took the pages out of their books and covered their walls with them. I guess that is one way to go, but that is not what it means. A ‘wallpaper’ historical romance means that there is very little detail given about the period in which the book is set, only enough to give some flavor. Anty does not do that.

For Anty, the best books to read, and the ones she likes to write, are the ones where the historical world and the romance are intricately intertwined and one could not be the same without the other. This does not mean that she writes about humans who actually lived in those other times, but things those humans do did affect the people around them, including the ones who live in Anty’s head. She wants to know what it is like to slip inside the world in which her story people would have lived, and see the world the way they would have seen it.

Since Anty has not, to my knowledge, mastered time travel (but Uncle says it is okay if she gets in a blue police box if it comes) this means she has to find other ways to know these things. Some humans like reading books (that are not fiction) to learn more, and Anty does that to some extent, but what she likes to do the most is get hands on experience. Living history museums and historical reenactments are her favorites, as she can pick up on details that books may miss. She likes to know for herself what a shipyard smells like, for example, or how heavy a musket is in her hands. She once talked a blacksmith into letting her come right up to the forge, which most guests do not get to do, but Anty has special writer powers. Watching period dramas is also good, because watching people move around in the clothing of a different time tells her more than looking at a still picture, even though portraits from a particular era are the most reliable source of how clothes actually looked. She also is quick to point out that, while things like white wigs and high heels on men look funny to modern people, in the times they were worn, those things were hot stuff, so her book people would probably like them. Then again, it all depends on the characters.

Anty is now making throat clearing noises, which means that has to be about it for this week. Until next time, I remain very truly yours,