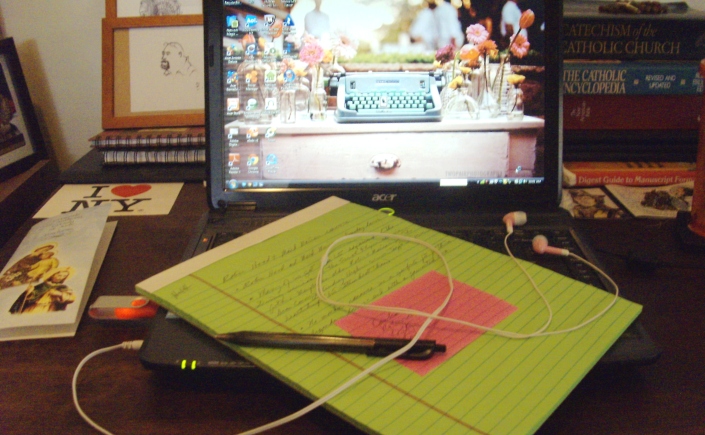 Writing is an exploration. You start from nothing and learn as you go.

Today, I am borrowing Housemate’s laptop, which is also currently Real Life Romance Hero’s laptop, as his gave up the ghost before mine did. I am writing this at Real Life Romance Hero’s desk, with the earbuds from my tablet, which is really more like earbud, singular, as only one works, because RLRH needed my laptop earbuds for his smartphone. His earbuds died before my earbuds became earbud, so I was happy to share the wealth.

On the way to the desk, I dropped the camera I needed to take today’s picture. The battery compartment sprang open, and I thought, for a minute, that the camera had breathed its last. Thankfully, I’d only put the batteries in again backwards. I have no idea how to use the camera on my tablet, so most of my use of that now consists of chasing Skye around the living room, asking her, “where’s your face?” Okay, question is really for the tablet, so that I can figure out where the darned camera actually is aimed. I have room for vast improvement in that area. So far, I am really good at getting blank walls in my view. I don’t think that’s exactly how it works.

I have one of two jump drives stuck in the USB port, the other one soon to go in alongside it, providing they fit. This excites me more than the average bear, because I can’t use them both on my own laptop, as one port is permanently occupied by the external keyboard that I am still convinced had some role in shutting off my internet from that particular computer, and if this is an easily fixable thing, I am going to have words for  myself, and not the fictional kind. New laptop has, according to tracking, left the warehouse and is on the way to a local big box store for pickup. Could be there as soon as tomorrow, could be as late as the weekend. Until then, it’s jumping through flaming hoops to do things that ought to be easier.

To write a long overdue post for another blog, I need to do some research on this computer, then write that down longhand and take it to my office at the other end of the house and write it on the desktop that has Word (this laptop does not, as it does not belong to a writer) then save to jump drive. Then jump drive comes back to this laptop so I can send it in at long last. Similar hoop jumping needs to happen for critting two friends’ manuscripts and work on one of my own, so I can send pages to this project’s critique partner.

Working on the desktop, which is older than Skye, and probably still has Olivia hair in the keyboard somewhere, means that I need to bring the tablet into the office as well, since I write best with music playing. I still have not yet found the ideal configuration of working at my desk with the current machines. Working on manuscript will mean working on non-internet laptop, as that’s the one that has Scrivener on it, which I am only now learning how to use for my particular purposes (as a kinesthetic learner, my best route is to jump in, muck about and find my own way; this is usually messy and results in a lot of things that don’t work, along my way to finding what does.) Using my current laptop at my desk means either having the external keyboard in my lap and head tilted at an interesting angle because earbud cord and charger cord for tablet are only so long, or having tablet ,in my lap and balancing external keyboard over laptop keyboard. That second option means that the external keyboard will randomly turn my laptop’s sound off and on, remind me I have no bluetooth devices (thanks, I knew that already) and/or that I am not connected to the internet. (Again, got that.)

This is not my ideal working environment, especially on a day that is so hot and sticky that the only thing I actually want to do is take a nap, which would make up for the too-humid-to-sleep night. Still, there is nothing that I would rather do than write in and about my favorite genre (time for reading it later) so, if jumping through the flaming hoops listed above is what I have to do to get there, then fine. I will do that. That’s the best thing to come out of the robot uprising attaching itself to multiple family medical emergencies in the last two months.

After two months of hands on caregiving, things are looking different. The theoretical schoolbus has dropped me off again, in front of whatever institute of learning is involved in this whole writing thing. As with improving one’s physical self, I’m going to consider that resistance builds stregnth. I’m inspired by a former student of mine, from my From Fanfiction to Fantastic Fiction course, a session a couple years back now, who wrote of how she would dismantle her entire desktop system, back when this was a Big Deal, load it in the back of her car, every weekend, so she could drive two hundred miles to the house where her collaborator lived. Once there, she’d put the darned thing back together, they’d spend the entire weekend writing, only to dismantle it, make the long haul back home and do it all over again the next week. I am still in awe of that sort of dedication, and, now that I do have to jump through hoops, I get it. It’s worth it.