On my own, I found my place outside the lines.
–Kathleen Bittner Roth

Sometimes, a writer has to bust out. This morning, I escaped the loving bosom of my family and headed for the park, to set up a temporary office on the picnic table beside the lake. I’ve learned that I need to know what I’m doing, and that writing things down means I can put the giant jumble of ideas in my head in some sense of order and then prioritize. This all made sense out in the open air, looking at ducks between bullet points, but now that I am inside and should be able to focus, my brain wants to wander. 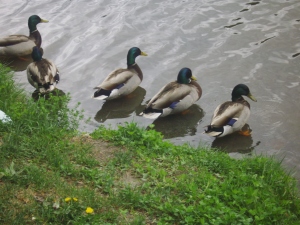 getting my ducks in a row…

One of the reasons I’m here right now is that I am committed to blogging three times a week, and if I put off posting until the weekend (after Skye’s post tomorrow) I will be fried. That’s not going to do anybody any good, so I will probably talk all around Robin Hood’s barn, as a high school English teacher used to say (ignoring the fact that Robin Hood did not have a barn; he was an outlaw who lived in the woods, ahem. Maybe he had a barn back at Locksley, but he’s over that now, and it wouldn’t have been one of his priorities, anyway. Now, where was I?) before I get to the point, if indeed there is one. Until then, there are waterfowl. My trip to the park yesterday netted me a peek at the first babies of the season. The Canada geese have spawned, three fuzzy yellow bebehs. The parents wasted no time in letting me know that picture time was over as soon as I got this shot.

I hadn’t expected to make such a connection, but as I settled in at the picnic table, with notebook and pen (after finding out that the sun made it impossible to see much on my tablet screen) it hit me why I liked working from the park in the morning as much as I do. It reminds me of day camp. Odd connection to make, but there it was. Maybe it was the travel mug full of Diet Coke talking, or maybe it was the chance to be seated on weathered wood, under the shelter of shady branches, immersed, as I often was during those long-ago day camp summers. I hated sports, largely because I was A) sun sensitive (still am) and B) nearsighted (still am) and I never fit in with most of the other kids. There was Them and there was me, and no matter how much I wanted to join in, I could never quite make the edges of the puzzle come together. Either I’d hang with the counselors (I was always more comfortable with adults, even as a kid) or I’d stay by myself.

If I couldn’t fit in with my real life peers (though, really, were they?) then I would create them in my head. I didn’t know that was writing, then, and I was surprised and perplexed to learn that not everybody did it. I loved Barbie dolls because they were, to me, tiny actors who never objected to my choice of costumes, roles or situations. Finally, a way to give faces and bodies to the voices in my head. I still remember my parents’ befuddlement when the first thing I did with my Jane and Johnny West action figures (12 inch, fully articulated cowgirl and cowboy) was make them reenact the balcony scene from Romeo and Juliet. (Signs your kindergartener will grow up to be a historical romance writer for one hundred, Alex.)

I didn’t bring dolls to day camp; I knew enough to do that, but when our counselors took us to the outdoor sunken basketball court and explained their variation on Red Rover, involving an orgre who lived beneath the blacktop and could come out of the storm drain, I soaked that like a sponge and created a princess who wanted to escape the ogre’s clutches, and what was supposed to be normal kids-running-around stuff became a mix of Nordic myth, various fairytales (not the sanitized Brothers Grimm version, not this girl) and probably some mix of whatever cartoon had held my interest at the time. When it came time to head to the pool for swimming, there were mermaids or a trip to Atlantis. A good deal of the time, I didn’t notice when the other kids didn’t want to play because I had friends who lived in my stories. Best of all were the times when I’d find a kindred soul and could entice them to play along.

It’s somewhat like that now, when I head to the park. The characters in my WIPs tag along, and, if I’m meeting reistance in a scene or a concept, it’s usually that I’m trying to force the characters to do something they wouldn’t. While we take a loop around the lake, in search of waterfowl, sipping a cold drink from our travel mug, or set up shop at the picnic table, the restraints fall away. The walls come down, as it were. I’m not sure if this is because the great outdoors is a good equalizer, and more familiar to my historical people than a recliner or ergonomic chair and blinking cursor on a blank screen, but I can’t discount it.

Even in those day camp years, my default story setting was the long ago and usually far away. I can’t explain it, other than the fact that I’m hardwired for historicals. The British Isles thing, I can maybe explain; our closest neighbors when I was little were a lovely Scottish couple, and my mom’s best friend was a British expat.  I soaked in the accents and the mannerisms, the folk tales and other bits that I’m sure I didn’t even realize, and they became part of me, part of the worlds I created when the physical one didn’t fit. Some things, I am happy to report, never change.