Hello, all, Skye here, for another Feline Friday. Very exhausting week to be a kitty around here. Anty was sick, the glowy boxes staged a revolt, and all three humans were at home yesterday. Well, Anty and Mama went out hunting, so that was not everybody all day, but it is difficult for one kitty to be in so many places at once.

One of the most important kitty duties is nursing. Anty does not get sick very often, which is a good thing, but when she does, I am there. This week, Anty only thought she was tired after she got back from the critique group, but then she was hot and cold at the same time, and things ached that should not be aching, and Uncle had to be the one to break it to her. She was sick. Anty does not like being sick, because she does not like “doing nothing” as she puts it. That makes her grumpy. Really, the best thing for the other humans to do in times like that is to give her some books and some movies and make sure she has lots of liquids.

She did not want food for a couple of days (I cannot imagine how horrble that must be. I always want food. Can I have some food now? I am very cute, if that influences your answer any.) but she has her appetite back now, which is a very good thing. I heard her and Uncle talking about dinner tonight (theirs, not mine, but I will assume my dinner was implied. I would like fish jelly, please.) and they seemed happy about that. She is also putting on real people clothes and even makeup, so I know she is better. This does also mean that she will be leaving the house again to go hunt (I assume she is hunting; why else would she leave a comfortable house with a kitty in it?) and do laundry. There was not a lot of laundry last time, because she only had pajamas on for most of the week, but there was still laundry. Ever since she found out how she can send her manuscripts to her Kindle, she has been taking those along and reading her own work as though she were the reader and not the writer. She says that gives a different perspective and likes to take notes on anything that stands out.

I helped her rest by sitting very very very close to her recliner and sending love beams in her direction. She says that helped a lot. I also helped her watch some movies. We liked The Perks of Being a Wallflower, although it did not have any kitties in it. It had friends and a love story, though, and Anty likes movies with those things in them. Also angst. There was a lot of angst. Angst makes Anty happy. This is not as alarming as it sounds. These sorts of things are perfectly normal for writers. She is open to suggestions for other movies with the same feel. She has already seen The Fault in Our Stars, and liked that one, and is looking forward to Paper Towns. She is listening to the book of that on her mp3 player right now. Well, maybe not right now. I do not know when you are reading this, so she may be listening to something else. Probably one of her story soundtracks, because she is back to writing. That is a big relief. She is cranky when she is not writing.

It is a good thing that Anty loves notebooks. Yesterday, Mama suggested that, since the computer power cords come in two peices, maybe switching the peices around would help them hold a charge. Anty tried that, and Mama is right. Anty now calls these “Frankencords,” and they hold a steady charge, where the other ones did not. New cords are on the way, and may be here as soon as tomorrow. That will make everybody happy. I heard Anty and Uncle talking about a tablet. I got worried for a minute, but it is all right. They do not mean they want to give me a tablet, and they do not mean the pill kind, anyway. The best I can tell, it is a very small glowy box. Maybe even kitty sized. It is hard to tell from the picture on the glowy box. Hm. Maybe they do want to give me a tablet, but the glowy box kind, not the kind the vet dispenses. Either that, or Anty wants to carry a really small glowy box instead of packing up the laptop every time she goes to the coffee house to write.

Speaking of writing, Anty has a new post up on Heroes and Heartbreakers, on the season finale of The Mindy Project. It is here and looks like this: 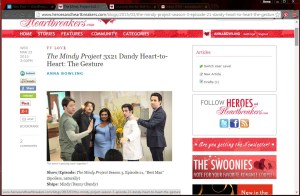 Anty and Uncle get grumbly sometimes about season finales in March. When they were younger, TV seasons went from September to June and that was that. It is much more complicated these days. Personally, I like watching birds through the window. There are no commercials there, but sometimes trucks and busses with ads on them drive by. I guess that is kind of the same thing.

Well, it is that time again. Anty needs the glowy box so she can write, and it really is my lunchtime, so that is about it for this week. Until next time, I remain very  truly yours,