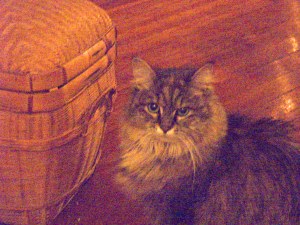 Hello, all. Skye here, for another Feline Friday.

Anty really needs me to blog for her today, because it is six days until Christmas. She says she has been running around in circles, screaming, but that is not entirely what is going on.  She has been spending time on the glowy box, and writing in her notebooks. Also making a lot of lists, because lists help her feel calmer and more in control. I wish I could make lists, but hiding under the bed does the trick pretty well, so I am okay most of the time.

Anyway, Anty has hit the critical stage for Christmas. That is her favorite day of the year. Normally, she is very happy about this from the time we are done with Thanksgiving dinner, but this year, not so much. Life is good, but there have been a lot of domestic tornadoes. Anty being Anty, she has a plan to work around this. Some of it involves making a lot of lists. She says she is not putting her lists on this blog, so I cannot share them, but she says I can share other parts of her plan.

What Christmas movies are missing from this picture?

Christmas movies are a big part of getting into the holiday spirit in our house. Uncle likes Elf, but we do not have that one. It is still good, though. Anty likes Love Actually so much that she has the book of it; that is in script form, not a novel, which she finds unusual and very fun. Yes, she has read along with the movie, in case you were wondering about that. She also can say Billy Mack’s whole swear line from memory and thinks it is very creative. She might not like me saying that, so maybe do not share that part. Thank you in advance for your discretion.

About a Boy counts because it is not a Christmas movie, but has two important Christmas scenes, and she says that is enough to qualify. It is also by Nick Hornby, and Anty really really likes his stories. She thinks he should write more books. She has already read all the ones there already are, so she needs more.

Mr. Magoo’s Christmas Carol is the first movie Anty ever saw in a theater. It was not new then, so you cannot tell how old she is by that. She does say she felt cheated because the first thing she saw in that movie was the curtains opening to show theater seats. That was confusing to a human kitten.  She still loves it, though, even if nobody else in the family will watch it with her. She would eat razzleberry dressing if it were real.

Anty did not want to see The Holiday at first, but her friend, Carol, said it was good, so she watched it and now she loves it almost as much as Love Actually. Only almost. Maybe if it had Hugh Grant, it would rank higher, but it does have Jude Law. Uncle does not like Hugh Grant, but Jude Law is okay. He has Jude Law’s Sherlock movies, but they are not about Christmas.

She took the Charlie Brown movie out of the library yesterday, because if that couldn’t get her in the Christmas spirit, nothing could. I think it is working, and she has not even seen it yet. This time,  I mean. She has seen it a lot before.

What other Christmassy books are good this time of year?

When Anty is not on her glowy box, in a notebook or watching a movie, she finds Christmas stories are very good this time of year. She loves Christmas romance anthologies (do you know any good ones?) and, although she did not know it, Landline starts at Christmas.  She says that is coincidence, but I think there may be something more than that going on. It is the season of miracles, after all.

Until next time, I remain very truly yours,